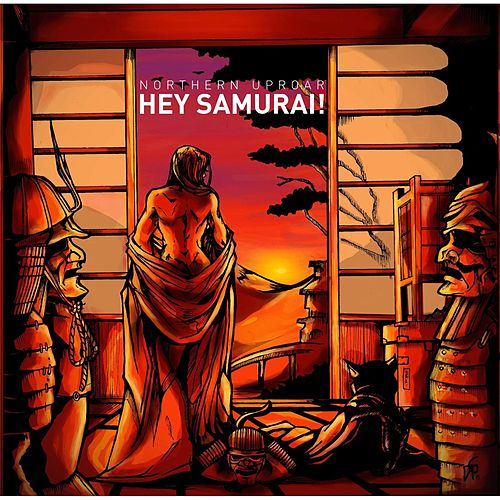 Northern Uproar Hey Samurai Album Release: 2015 saw the return from Northern Uproar into the studio, along with a bunch of Manchester’s best musicians. We left behind the expected ‘Indie’ sound that the band are known for and produced an album more towards Leon Maya’s grass roots of rumba and influences such as the Gypsy Kings. A bit risky some might think but very few know Leon’s background in Spain. It may have Northern Uproar on the record but ‘Hey Samurai’ is really an expression of Leon with contributions from Song writer Chris Gorman and Producer Steve Oaks.

It was a privilege and an absolute ball to be producer, mixer and remixer on this album which has been well received. I wish them the best of luck with the release.

Northern Uproar’s fifth album ‘Hey Samurai!’ is a world away from their scrappy self titled Britpop debut of 1996 and the follow up of 1997 ‘Yesterday Tomorrow Today.’ We leave the greasy raucous sound of a Saturday night at the Roadhouse for more of a soundtrack to a Madchester Sunday morning.

The tracks are soaked in warm bass, rich in harmonious vocals and littered with stylish Spanish style guitar. Meya’s vocals have lost their rough edge and touch on perfection in the way they are effortlessly paired with clean and sharply executed guitar. The album speaks in every track of a band with experience. The instruments used range from a giro to bongos, trumpet to harmonica and all are deployed with finesse. The little flares of brass which emerge at the end of certain tracks, rounding off the whole air of optimism the record exudes, are superb. There is a dub vibe in the constant rich bass lines and something continental in the guitar. The tracks flow past in even bursts, leaving you with a sense of sun soaked streets and mellow mornings after the night before.

A stand out track is undoubtedly ‘Outlaws Robbing Trains’. The Manc Review heralded it as their single of the week back in August and as a track it does stick somewhere between your eyes and refuses to depart until you’ve bopped your head to it the entire day. The synth and Leslie-Hammond sound is deployed with confidence and style (The Stone Roses’ Mani would have been proud of that funky bass line). The echoing vocal is a throwback to the best Britpop gave us, before the track runs head long into that awesome organ once again.

‘Jackals’ and ‘Last Call’ come in at the softer end of the spectrum, but both stand out for their beautiful lyrics, clean composition and pure vocals; twinned as always with that bass which pumps in your chest cavity, reminding you constantly of its presence. ‘Rodriguez the Bull’ has the surrealist confidence of something like The Beatles‘ ‘Rocky Racoon’ or ‘Maggie Mae’; it’s mad but you’re loath to skip it.

The tracks aren’t muddied or overfilled. The effectiveness of the album comes from the way guitar lines and Meya’s superb vocals are allowed to speak for themselves in uncrowded well executed tracks. Now for the critique, which is very much of the if-you-have-to twisted arm variety. Where was this album two months ago? It is so warm it would have been a welcome addition to the indie summer soundtrack of 2015.

This is a band that knows their sound. But it is a sound they are willing to develop – and develop it they have with great style. There is often a golden-age tendency amongst nineties artists to herald back to the good old days when bands ruled the world. Noel Gallagher won’t stop telling us that there will never be another Oasis: of course not. Music has changed over twenty years and Northern Uproar not only acknowledge this, but embrace it. The use of interesting synth sounds, the spicy brass additions and the immaculate production pay testament to a band with talent and ever burdening creativity.

The band’s name has always struck me as a guarantee of quality, enveloping that Mancunian groove, but printing something on that is both fresh and resilient. Spots of inactivity in the band’s career have had little impact on the quality of the albums they produce, which always fall on a reviewer’s ears with the positivity and success they deserve. This is a stylish and experienced album from a stylish and experienced band.

If you’re not familiar with Northern Uproar, then I suggest that you make some time and catch up on their back catalogue as soon as possible. You see Northern Uproar are one of those great Manchester bands that has achieved so much, but not really got the credit that they have deserved. Formed in 1993, Northern Uproar have made four great albums, which has brought them critical acclaim, across Europe and Japan as well as locally. Having supported Paul Weller, Cast, The Charlatans, The Prodigy, The Coral and Black Grape, Northern Uproar have gained a loyal fan base, whilst stretching out into new musical horizons. As well as being one of the most industrious bands I’ve come across, Northern Uproar have evolved without losing their sense of brotherhood and authencity along the way. With Leon Meya on vocals/bass, and Chris Gorman on guitar/drums, Northern Uproar are stronger than ever, proving that despite having a change of line-up over the years, a band can survive and grow better with age.

Following the success of their 2013 album “All That Was Has Gone”, Northern Uproar have been busy in the studio recording their new album “Hey Samurai” which is testament to their staying power, diversity and professional approach. Taken from this forthcoming album “Outlaws Robbing Trains” sees Northern Uproar take a more eclectic funked up sound that is so impressive that I have selected it as my “Single of the Week”. It’s quite a quantum leap, which sees Northern Uproar roll-up their baggy pants and go skinny-dipping under the Farfisa waves. With it’s Eastern chimes and elongated synths “Outlaws, Robbing Trains” transcends a breezy ambience and its sunshine rays stream through the jangly riffs. It’s a brilliant song, which sees Meya’s rich vocals command centre stage and show us that Northern Uproar are more than just a “Manchester/brit-pop” band or a one trick pony. Along with the funky deep bass, pitter-patter synths and bongo drums, “Outlaws Robbing Trains” evokes feelings of sundrenched euphoria, whilst dancing around the new wave funkadelic vibes.

I’m a huge fan of British pop/rock so these guys aren’t new to me, but I couldn’t be more excited about the release of their new album, Hey Samurai! Northern Uproar have been around for a while (forming in 1995) so they have a few albums to explore, but they really take on a new sound with this latest release.

Hey Samurai! is the band’s first album since they lost Jeffrey Fletcher (guitarist) in a collision in 2014. Essentially a new band without Fletcher, Northern Uproar have developed a whole new sound with Leon Meya (vocals, bass), Alex Stubbs (drums) and Chris Gorman (guitar).  The album is a lot more mellow and chill than some of their other work – think more The Kooks and Doves and less Franz Ferdinand.

The first track on the album, 24 Hours/24 Days, has some funk influence in it, and I love it. It’s the type of song that everyone at the party would be into if it came on your playlist. Its upbeat tempo combined with Meya’s smooth voice and heavy bass makes or a really fun song.

The album is really multifaceted, no two songs sound alike. When you think you know what to expect next, they surprise you. Take for example, Chasing Demons and Jackals, they both have pretty heavy Mediterranean vibes which makes sense considering Meya spent a lot of time in Spain during the band’s break up in ’06.

The listener is thrown through yet another loop with the somewhat twangy song, Keep Getting Away. It almost sounds like the guys decided to venture into the pop-country world for just a second, before coming back to their predominantly Spanish/acoustic sound in Everlasting Rain.

My personal favourite, Last Call, has a lot of organ in it, which makes me feel like I’m listening to something my dad would’ve helped me learn to love when I was younger. It’s the closest thing to a love song on the album, but it isn’t a ballad, which is refreshing.

The last song, Yesterday’s Gone, Tomorrow’s Not Promised, circles back to the funk influence we heard in the first track, but it’s a lot more laid back and full of melancholy. One can only assume based on the title and lyrics (“I bet this is my time…I’ll keep running, I’ll keep going”) that this song was at least partially written about Fletcher. I can imagine watching couples dance together romantically with this song playing in the background – it’s quite beautiful.

Then, just when you think it’s over, there’s a quick Spanish tune at the end. It’s full of Latin percussion, horns and Meya rolling his Rs. The two minutes are a great pick-me-up at the end of a somewhat slow album.

Hey Samurai! was definitely a surprise. I never expected Northern Uproar to produce music with maracas and other Latin percussion, but here we are, and it works! The album is definitely less indie rock and more Britpop, but the smooth vocals of Meya and the heavy Spanish vibes make for a surprising but mature sound and a seriously delightful listening experience.

So, with an album title that suggests a Japanese theme, what do Madchester veterans Northern Uproar open the album with? Can you guess? Mangapop electronics? Thrash metal? Something vaguely oriental in its musicality? Nope. Flamenco guitars and mariachi trumpet provide the accompaniment to the tale of ‘Rodriguez The Bull’, sort of a cover of ‘Legend Of Xanadu’ with musical arrangement by James Last or similar. Wouldn’t ‘Ay,Toreador!’ have made for a more accurate title? Anyhow, we should allow a band that first broke up in 1999 their moments of levity, particularly as the remaining ten tracks are some smartly played late Britpop and it was only my music player putting what is actually the album’s last track in front of actual album opener ’24 Hours/24 Days’ that had me wondering what Northern Uproar were getting up to now.

It probably does need some quite experienced musicians to get an album like ‘Hey Samurai!’ right. Despite its exclamatory title, a lot of the music is a bit laid back and influenced by, there’s no other description, the sort of loungecore muzak that used to turn up in the advert breaks in cinemas. That Northen Uproar can take such a less than inspiring sound and actually write some decent songs around it says a lot for their own abilities and as they delve into referencing Indie Dance on ‘Outlaws Robbing Trains’, go a bit alt folk on ‘Jackals’, or when they’re just writing guitar songs like ‘Keep Getting Away’, with the congas and sequencers tapping and whistling away in the background, ‘Hey Samurai!’ begins to make more sense than my own music player initially made of it.

There is an undeniable Spanish influence throughout the album though, and ‘Start It All Again’ with its samba rhythm and flamenco guitar solo actually sounds as if Northern Uproar are spending half the year in Malaga, only returning to Manchester to record the songs they’ve written there. Whatever it is, ‘Hey Samurai!’ is a smoothly crafted and cleverly arranged piece of modern MOR and just about right for the late night chill zone, whether you’re in Seville, Stockport, or anywhere else.

Back To Blogs page

Back To Blogs Page